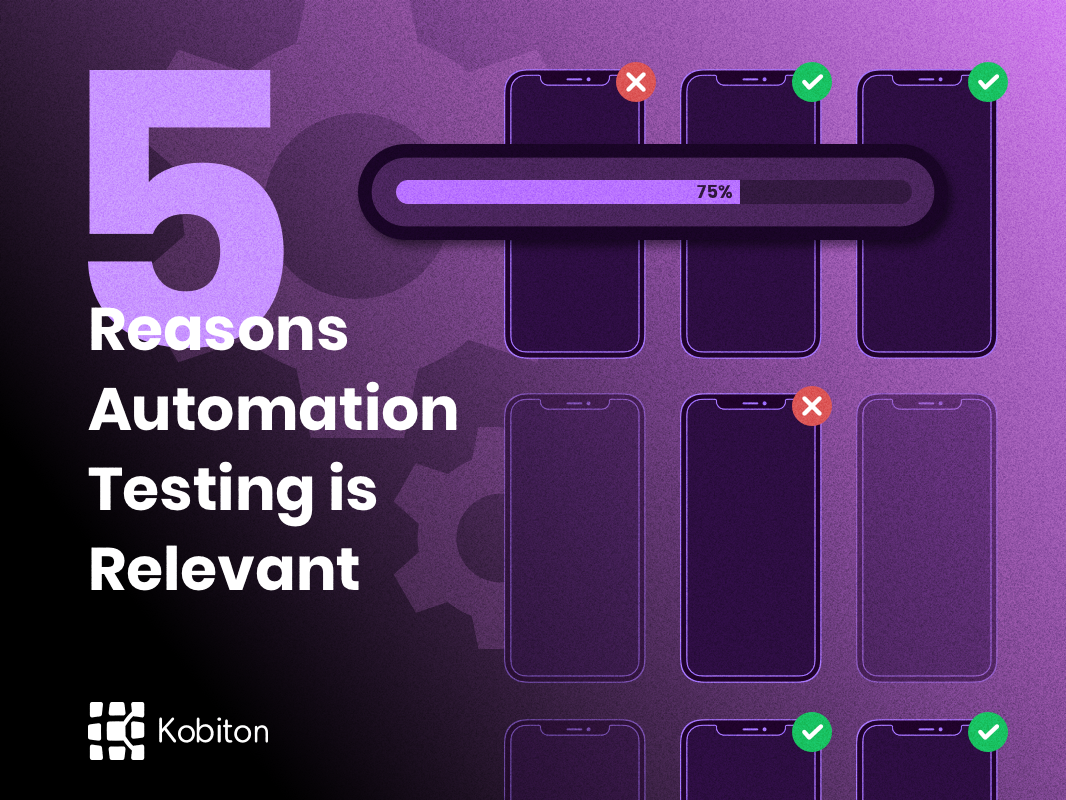 Check out part 1 of this series: 5 Reasons Why Manual Mobile Testing is Still Relevant

Despite the attention that the development side of app creation gets, testing is the focal point of any major mobile app creator. Successful teams will dedicate personnel and key hours of development to this critical aspect of development in order to ensure that their app is up to speed from the moment it hits the Apple or Google Play Store. When it comes to testing, the benefits of automation testing are nearly as multifaceted as the apps we work with. Ultimately we make use of automation testing for the purposes of reducing our efforts in mobile app testing, delivering capability in a faster and more streamlined package, and cutting down excess waste so that our departments can operate at a budget that works. All of which are major benefits of automation testing.

The cost perspective of automation testing is one of the primary benefits at which we can look. The initial startup cost for automation testing can incur a bit of a fee, but from there the automation essentially cares for itself. Software development teams can invest in more expensive options and software upgrades as they go, but this is entirely up to the dev teams and their needs.

The reality is that automated tests need a lot of attention upfront; they’re simply not going to write themselves. It requires a dedicated team with the knowledge to plan for and implement a program that will work seamlessly for your app in a responsive manner. With that said, the continuous cost to maintain your automation testing is minimal. This provides a tremendous amount of flexibility for teams who make automation testing their primary method of assessing apps.

When considering manual vs. automation testing, it should be understood that manual testing methods could potentially be prone to more errors. This is due largely to the human impact on the testing process, with a variety of tests requiring different execution sequences. One of the benefits of automation testing is that these human errors are mitigated if the code is carefully constructed to begin with. Automated tests work the same way time after time, with the least amount of time between tests possible.

Going through shorter cycles in the development process is a must for dev teams. Utilizing Agile solutions such as 2-3 week-long sprints is the typical way to work through a management sequence for app development and testing. Each sprint consists of smaller, attainable goals for the dev team, and testers play an integral role in this process. Automation testing works fantastically within an Agile setup.

Relying on a testing procedure that can be replicated repeatedly throughout short sprints is an excellent way to instill confidence in your team, using a highly efficient system that can point out errors in the midst of a reduced turnaround. These advantages will allow team members to get answers and integrate code much more quickly and efficiently.

Automation testing is ideal for measuring unexpected and unanticipated user loads that would otherwise be bypassed during manual systems. Manual testers typically reach load test management at the end of a production cycle, but automation allows for testing to integrate uncommon loads throughout a multitude of cycles. The types of automation testing that encourage Agile development are a perfect match for short development cycles, and automation testing makes its case for load testing frequently by making it easy.

The reality is that companies have a tendency to wait until the last possible minute to test for user loads, sometimes only days before product rollout. At this point in development, the smallest of errors can be catastrophic and lead to time crunches and scrambling teams. Implementing an automated load test management throughout the development process saves headaches on the backend -- not to mention insulates your team from the prospect of a delayed release.

Last, but certainly not least in the eyes of any dev team that’s had their skin in the game for any length of time, is the benefit of automation testing to reduce time in the overall production process. While it can involve significant work upfront to create certain types of automation testing, your team can reuse tests over and over, modifying certain metrics to meet your needs. This greatly reduces the amount of time and work hours needed to operate a testing regimen beyond the initial cycle, freeing up teams to fine-tune the app or work on other endeavors.

Automation is the key; you’re using a machine to do the work for you. All of the manual tasks, like setting up environments and carrying out repeated steps, are done for you. You merely sit back and allot your now free time to preemptively tackling any issues you may anticipate arising during the testing cycle.

Automation Testing: The Solution to All Your Testing Problems?

...not quite. Automation testing should play a critical role in your testing, but the debate over manual vs. automation testing doesn’t have to result in a single outcome. Both types of testing hold their own merit and place, and embracing both for different situations within your testing team results in the most concise, efficient, and versatile response to mobile app production testing.

How your mobile testing infrastructure can impact overall cost, delivery speed, and coverage   ...