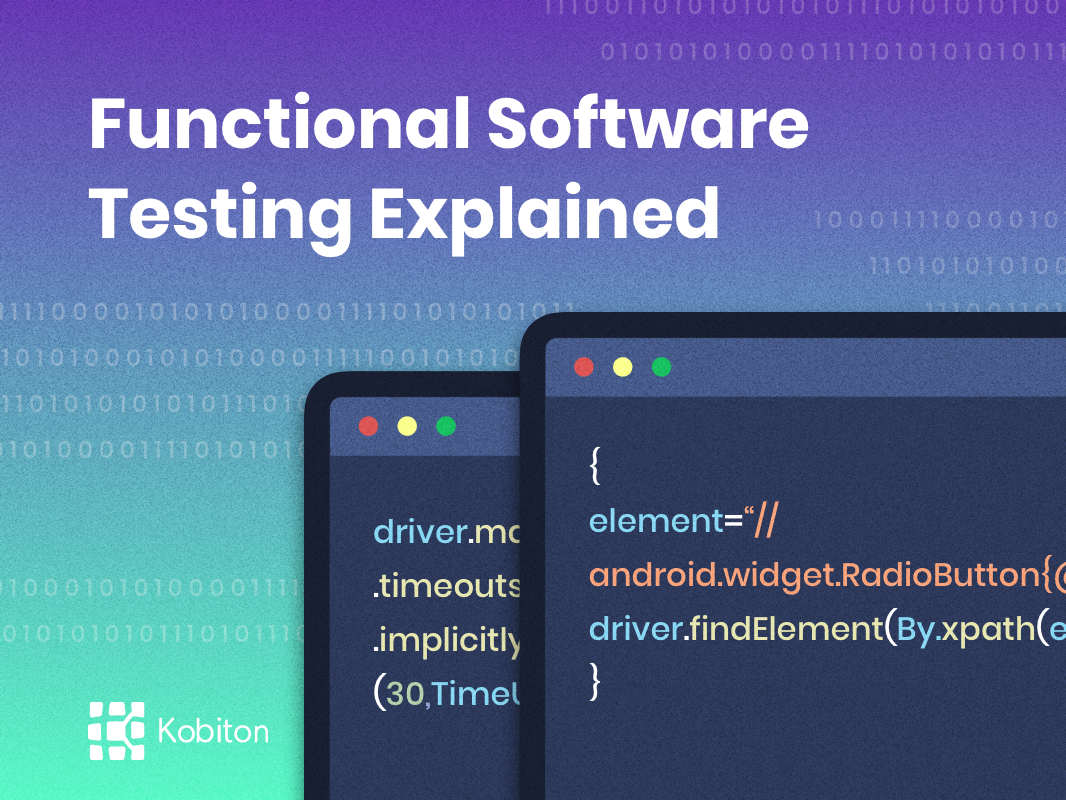 Dynamic system testing using manual or automation testing is critical to any dev team. Knowing response times, how data is managed within an app, and the quantitative analytics that support decisions for teams is vital to the success of an app. Still, testing is nothing without a functional testing method that analyzes individual components throughout the development process to ensure ongoing success for the mobile app.

Functional testing for mobile applications involves QAs determining if certain aspects of an app are acting in accordance with their expectations throughout the development process. It’s thought of as testing from the perspective of the end-user: your consumers that will be using your app on a day-to-day basis. In many ways, this is the most critical facet to your end game. Our goal is to explain what functional software testing should look like, and how you can prepare as an organization to implement functional software testing into your game plan moving forward.

The Process of Functional Software Testing

If the outcome of functional software testing is to develop software that follows consistent protocol, with a user interface that’s reliable and properly integrated to achieve a high level of product stability, then habitualizing the process to reach that point is a necessity. Making these processes a facet of everyday testing will keep teams locked in on the task at hand and ultimately benefit the final product tremendously.

In functional testing, the process is a form of black-box testing whereby every component of a software or mobile app is tested against functional specifications and requirements. These specs can vary widely and funnel down to the most basic concepts, such as whether or not you’re able to login to the app with the proper credentials or does your “Create an account” icon actually generate the “create an account” screen for users to populate. This process varies from unit testing that’s traditionally done by developers, checking to see if the code works as expected. Unit testing, often referred to as a white box testing, devotes a large portion of the process to analyzing the internal structure of the code.

The premise is that the individual components of code within an app’s design may look flawless on the screen, but functional testing analyzes whether these lines of code are interacting in practical form the way that designers intend. Functional software testing aims to address the prime reason the software is used, which leads to a number of goals and micro goals for testers to direct their attention towards.

Let’s apply this approach to testing by assessing whether or not a feature is working properly per its specs. To do so, testers can divide their testing goals into two parts: defect and validation testing.

Defect testing is a functional testing tool that is applied to uncover the defects in the functionality in terms of items like error messages and text handling. This type of test is used effectively when it determines the error causing a function to not operate as intended.

A validation test is a separate functional testing tool that demonstrates to developers that a software is meeting requirements, ultimately determining if the system is working as intended by the end of the testing cycle.

If applied to testing something like the checkout system of a store within a mobile app, testers should expect to be able to analyze the functionality of the following by the end of the testing cycle:

How Kobiton Can Help

Understanding the scope of projects and personnel required to undertake functional software testing, along with considering automation methods, can be a major endeavor for testing teams to undergo in the beginning. That’s where Kobiton steps in. The Kobiton experience encourages proper management of a testing cycle through a mobile testing platform that accelerates delivery and testing of mobile apps by offering manual and automated testing on real devices, in the cloud or on-premise. Kobiton can assist teams in understanding the scope of their project and the types of testing required to best achieve the results they’re looking for. With a top-down focus that will encourage organizational methods for better testing, along with automation tools that are second to none, you’ll be able to maximize the efficiency of your mobile app testing with a functional approach that ensures your product is ready to go at launch and be a smash hit.

How to Test a Web Application Easily with Cypress Commands

Cypress is a modern front-end testing tool to provide a unified testing environment for web...