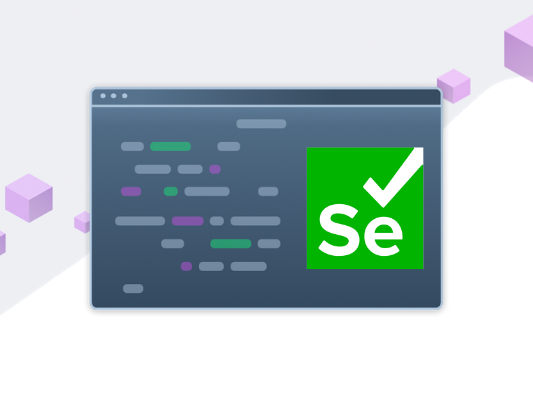 Selenium is a suite of open-source tools and libraries that automates web application testing. The purpose of Selenium is to help testers run scripts on leading web browsers and platforms.

Selenium at a Glance

Selenium supports various programming languages such as Java, C#, Python, Ruby, JavaScript, and Kotlin, which testers can use to create scripts for test automation.

Web browsers are pieces of complex code that are constantly changing and different from each other. However, with Selenium, you have to write only one testing script for all these browsers. Selenium's one interface to interact feature will run the scripts on all the web browsers. Currently, around 1300 companies including, Alibaba, Google, Netflix, etc., perform their application testing via Selenium.

Selenium 1 (Remote Control (RC)) was released in 2004 by Jason Huggins to reduce the time spent on manual testing. Later, in 2008 Selenium 2 was released with the addition of WebDriver with Selenium RC.

In 2016 Selenium 3 expanded the list of supported web browsers along with mobile testing capabilities. This long history of Selenium has made it the pioneer in automation testing, while the future of Selenium (4) is expected to make an even more tremendous impact.

The Selenium WebDriver controls the browser directly as a regular user would do, locally or on a remote machine using the Selenium server. The Selenium Grid facilitates multiple tests simultaneously on different computers and different browsers. It saves a lot of time by testing parallelly instead of running individual tests.

What’s Coming with the New Selenium 4?

The release of the first beta version of Selenium 4 was in February 2021. Selenium 4 will deprecate JSON wire protocol and instead include W3C standardization for the WebDriver API, enabling direct interaction with web browsers.

The Selenium Grid 4 will be smooth and easy as it will come with the Docker support, plus the ability for testers to deploy the Grid on Kubernetes. Additionally, human-understandable TOML (Tom's Obvious, Minimal Language) allows writing the configuration files for spinning up the grid instance.

The Selenium 4 IDE comes with an improved GUI and provides support for Firefox as well as Chrome.  Moreover, the new IDE will consist of features such as Selenium IDE runner that allows testing on local and cloud Selenium Grid, element locator strategy, and many more.

Selenium is the only free platform that can challenge the other premium testing platforms. This tool doesn't require learning a new programming language as it is portable with all the browsers and platforms. On top of that, Selenium supports mobile testing, which enhances the testing effort further.

Selenium boosts the development processes by conveniently integrating with around 28 development platforms such as Sauce Labs, Lambda Test, and BeautifulSoup.

When you integrate platforms like Lambda Test with Selenium, it outputs feedback much faster than expected. Therefore, the developer can work quickly towards the changes henceforth, achieving the goal of CI/CD in the software development domain.

You can learn here how to use Selenium for mobile cross-browser testing using real Android and iOS devices and real web browsers on these platforms on Kobiton Cloud.

With Selenium, you can integrate unit testing frameworks (such as JavaScript - JEST & Jasmine, Java - JUnit & TestNG, Python - PyUnit & PyTest, and so on) depending on the programming language you use.

You can also take advantage of Selenium’s built-in reporting capabilities in the unit testing frameworks. The xUnit format reports are for importing results into Continuous Integration (CI) servers like Jenkins, Travis, Bamboo, etc.

Visual forms of presenting data-driven insights are essential for the stakeholders to understand the state of the project. However, Selenium has the limitation of the inability to generate automatic reports. Still, you can use third-party solutions such as Allure, JUnit, TestNG to generate reports. We can also expect that Selenium might bring this feature in the near future.

Selenium has to cope up with the changes of dynamic web applications as they keep changing constantly. For example, Selenium will not be able to locate the element when the web application modifies the XPath or when the name, class, or id field value changes. Therefore, Selenium is not always accurate with dynamic web elements and rather adapts to changes.

Selenium automation testing is not a wise choice for testing image verification, and manual testing is the best for that purpose. One significant drawback of a free and open-source tool is that you do not get dedicated support for it. Instead, you have to depend on community support for bugs or any other unexpected issues with the tool.

How to use Selenium?

First, you have to decide which browsers you are going to perform the tests on. Selenium supports all major browsers - Google Chrome, IE, Firefox, Safari, Opera, Microsoft Edge & HtmlUnitDriver.

Then, you need to know on which platforms you have to perform the tests. Selenium supports Windows, Linux, Mac, Android, and iOS.

Now you know that Selenium supports simultaneous cross-platform testing so that you can select multiple options from the above lists.   It is better to decide what type of test you need to perform, and a lightweight test such as a unit test or any lower-level approach is much preferred. Always ask yourself if you need an expensive functional test or UI test before making your decision.

After finalizing your choices and got ready with the Selenium environment, you will usually perform three steps to automate your testing:

If you need more information, always refer to the official documentation here.

Selenium has been the pioneer in web automation testing for the past two decades. Its features help resolve many factors such as affordability, cross-platform support, integration with third-party tools, parallel & remote execution, and many more.

Web applications and mobile applications are the future of the world. Even though we do not know how technology will change in the future, it is obvious that Selenium has been the number one free automation testing framework so far.

Moreover, industry giants like Google and Netflix still prefer Selenium compared to other paid tools. The reason is that Selenium constantly evolves and adapts to the changes in technology. Therefore, we believe that Selenium will continue the same and remain to be the pioneer of automation in the future.