Home
/
Blog
/
The Basics of How to Performance Test Mobile Apps 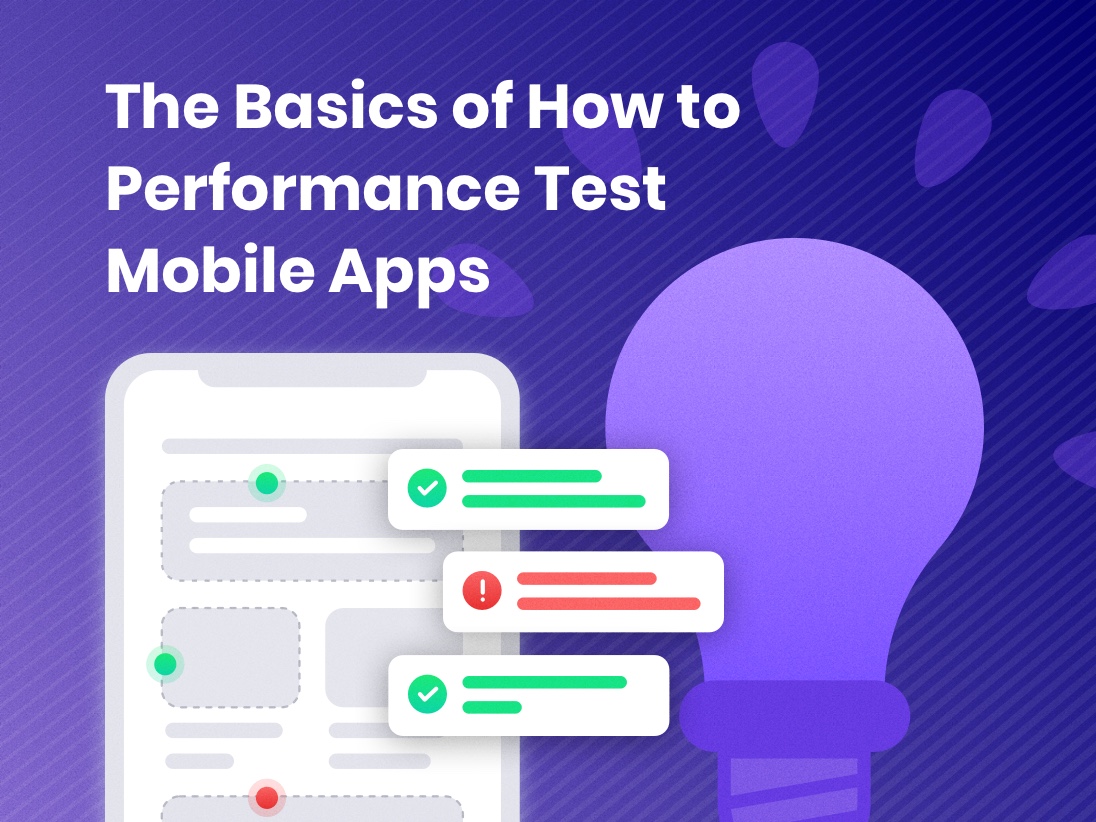 Performance testing lacks the attractiveness and appeal of the creative stages in a mobile app development project. With a slew of media, from television to novelizations to films, glorifying the developers of some of the biggest tech projects in the last several decades, the teams behind the scenes are keenly aware of how critical performance testing has always been to successfully launch a project off the ground.

Imagine the process from the consumer perspective. Say you download a brand new app that helps users identify dog breeds by snapping a photo of a furry friend at the local dog park. The user goes to open the app, clicks on the camera icon, and boom. The app freezes. The user stares, taps the screen a few times, then a couple more vigorous taps with a bit more frustration. Finally they swipe up, close out of the app and forget it ever existed until a notification reminds them that it’s about time they uninstall it.

Performance testing is designed so that these types of events are no longer a threat to your product’s success, so that your team can be sure that the success of your mobile app rests on its own laurels. That’s why we’re going to discuss the in’s and out’s of performance testing so that you can be positively sure that your team is taking a wise approach towards integrating performance app tools for a successful mobile app launch.

The first thing to understand when conducting mobile app performance testing is that it can differ significantly from web application performance testing. If you have a background in the web niche, you have to prepare room for the fact that mobile applications must account for a variety of obstacles. These range from packet loss to latency, network conditions and type of device being used. Each of these present unique trials for testers to accommodate for.

The type of application should also be considered. Generally, mobile apps will fall under one of three types:

Browser-based responds exactly as it sounds: in order to access, there is no additional software that needs to be downloaded to a mobile device. The user opens a browser and goes. These are known for being lightweight apps, built on the same stack across devices. Native apps offer a software download that runs independently on a mobile device. These apps can be far more powerful and dynamic, but can have drawbacks (like requiring an internet connection to operate). Hybrid apps, as the name implies, is a mixture of both, typically using a native shell for a more speedy experience.

Emulation is ideal for testing load management. Want to know what happens when one million users go to access your app at once? Emulation is your best friend, as it doesn’t require your team to purchase one million devices to create the occurrence. Being able to measure these components of structural integrity are a major part of emulation in performance testing for mobile apps. Just as well, using real devices allows testers to simulate what real gestures look like and how they respond before bringing an app to market.

Testing teams will often take one or the other, but both testing platforms have their perks. Developing a cohesive strategy is integral to making the most of your round of performance testing. Your typical step-by-step approach will consist of the following steps.

When creating a strategy, make sure that what you’re testing matches the individual and collective goals of your dev team. A tester’s first and foremost priority should be to ensure that the vital components of the app – as an example, the shopping cart for an e-commerce platform – function flawlessly. The test team should grasp the essential structure of the project and address the concerns that would render it a loss on Day One.

Figuring out your key performance indicators (KPIs) will ensure your ability to conclude if a test is a success or a failure. When doing mobile app performance testing, KPIs can include metrics such as error rate, peak number of requests, or average response time.

Outline multiple scenario trees and then test the packets with real-life testing environments. This is where employing a variety of testing platforms, from real devices to emulators, comes into focus. Getting a true feel for how an interface will perform is key in this section of the strategy. Using real hardware, one can get a feel for how device functions like camera access will work in conjunction with a mobile app. Emulation will also measure parameters like latency and bandwidth concerns at this stage.

If a company uses dev strategies like Agile, these should be continuously used throughout the testing cycle. Seamless integration is key, not just for project timeliness, but also to cut down on frustration and improve communication between development and testing teams.

This basic outline, coupled with the right mobile app performance testing tool, can lead to a plethora of success for a team on the road to launch.

What the Expertise of Kobiton Can Do For You

Kobiton comes into play by providing a mobile app testing service that will set your team up for success. Kobiton focuses on delivering real data to test teams with none of the fluff. Determine your KPIs and Kobiton will measure them in dynamic ways that provide feedback with both raw data and situational analytics that will speed up the corrective process. Kobiton’s AI engine will catch anomalies in the performance testing cycle that lead to memory spikes and app crashes, allowing you to ensure a secure rollout. Being able to test across hundreds of devices in real-time, with the understanding that gestures are more than emulations, will give your testing team an accurate look into the full scope of analytics that go into a mobile app.

Tired of wondering how to do mobile app performance testing? Learn and grow with the assistance of Kobiton, and ensure that your app is on a clear path to a five-star rating today!